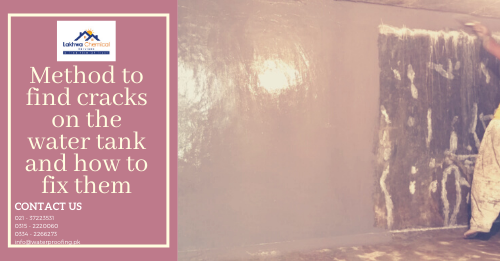 The water tank is the only area which we deliberately want to get damaged once its life ended. Since major water tanks are usually made from concrete as they can be how we wanted to base on our facility construction. For another form of the water tank, which is usually found in the form of plastic, or aluminum, the cracks and damage do not come that easily, but they also can’t store a lot of water due to a limited size. Since we are primarily a water tank waterproofing company in Karachi, we want to limit our scope with concrete-based water tanks because there is absolutely no shortage of those water tanks in the market.

Understanding the life of concrete walls

There is no special material being used over the concrete water tank in the first place. The main reason for this is the use of water as a staging area where other people might take benefit from the water dispersed down into their secondary water tanks. Usually, large residential buildings have concrete water tanks surrounded by concrete walls. There is a life duration of everything, the same can be said for concrete water tanks as well. If we talk about the average, concrete can last for around 10 to 15 years, and after then, it starts to show signs of damage in the form of cracks. This means the life of a water tank surpasses to its maximum. In this article, we firstly want to understand various types of cracks located around the water tank in general and concrete walls in particular. After then we can distinguish between adopting various types of solution at our disposal.

Types of cracks on concrete walls

There is absolutely no doubt that once the concrete reaches its extreme level of integrity, the signs of damage that emerges are mostly in the form of cracks. It helps us to identify that a certain water tank will require a round of renovation work or at most some civil works to ensure that major damages are not exerted. But before anything else, understanding various types of cracks helps the contractor and most importantly the house owner that how the concrete wall reacts to the water-based damage. For water tank, there is no option to hold water cause its the only purpose of a water tank to store water in the first place. The only viable option left for us is to get accustomed with some concretomology and learn some science of cracks.

During the construction of the water tank, there are various batches of concrete laid down in layers. Some before others. The cracks which emerge in between of old concrete batch with the new one is called cold joint. It to without a fact that batch of concrete doesn’t intermix with each other and in return the water-based damage takes place by creating some visual sign that old batch of concrete is now many effects than the new batch. Its the most common form of cracks found around the concrete water tank.

There are two forms of construction taken place initial creation of a concrete water tank. One is through laying out the liquidized form of concrete over a section created by hollow space from shuttering work, while the other method is through using multiple concrete slabs that helps to cover the water tank based on the construction requirement. The important aspect of both of this construction is completely dependent on the scenario, where one method supersedes the other, or both can be used at the same time. In terms of construction joints, the crack which appears due to the missing link between two slabs is effected from various methods and then a crack could appear that further damages the construction level.

Some cracks are left intentionally due to the effect of contraction and subtraction from thermal heat. And then there are cracks which are left during the construction of the water tank due to the limitation of technology, such as the timing of concrete pouring and other methods. No matter which type of method leaves the joints, and after a certain amount of time passes its only natural to see that effects of these intentional cracks to get wound up to produce even more cracks in the meantime. This is important to understand the effects of control joints in our everyday life that gets in most people way to maximize the damage rather than minimizing it.

Leaving section to withstand extreme temperature on the concrete walls are a normal practice for most developing areas. As for water tank, its quite a rare sight that expansion joints are being made for this regard, but never the less, its something found over the concrete walls and construction methods in Karachi for various reasons.

How to fix them

Where ever a concrete construction is found, there is an inevitable reality that various cracks will emerge from within. The only question that might arise for this query is the matter of when the cracks will occur. Once you acknowledge a crack over your water tank, time is of the essence, since as the damage will only intensify concerning time. Availing the service of waterproofing based solution is the real treatment for all these cracks promptly since these water tank waterproofing service will be used to airtight the cracks to its maximum, ensuring that no water goes down from these cracks and intensify the damage to even further.

While the cracks can occur at any rate, its best to fix them quickly rather than taking your time because the cracks will only maximize the rate of damage to even further. Once the application of waterproofing based solution over your water tank is done, you can add up around 5 years of life into your water tank, without any extra investment or completely replacing your old water tank to a new one. For the case of a concrete water tank, you might end up constructing a new one for a chance, which is on its self a time-based solution not to mention heavy invested one.

Major causes of leakage within the basement in Karachi