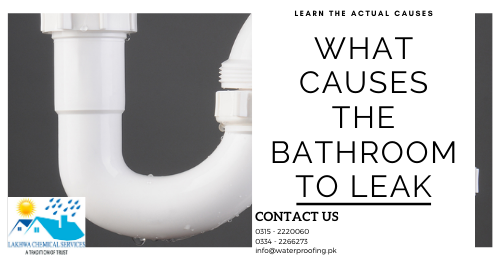 Bathroom leakage is nothing short of a mystery when we start to find its actual source. In short, it has become a normalcy enough that every bathroom has some level of leakage pertained around its area, whether we are looking at leakage around taps, or through the walls and ceiling. Fixing it is a part of our job and through the use of specially developed chemicals, it is not possible to get completely secure from bathroom leakage and seepage treatment  in the first place. But before going any further, understanding the causes of bathroom leaks helps to identify certain areas which could assist our during our chemical treatment and which area are critical in terms of water-based damages.

Before readily pointing out the places of interest, let’s assume you have constructed a bathroom first time and place everything in order. After like 20 years and above, you start to notice impeccable water-based damages around the bathroom. The damages are usually in the form of cracks, damages, and improper status of a component. Before assuming any third party being effected over the pipes and such, you must consider the expiry date of the very element which has been in consistent use for years. Indeed, the slow decay of the element has crossed its threshold level, which in result starts to surface water-based damages to a greater degree. If something of that sort is happening, it is better to leave everything aside and replace the old component with a new one.

The leakage can only happen through a water source, and it’s better to list down all the points which caries and propagates water. The first thing that comes in our mind is the physical pipes that take away all the drain water out from the bathroom. The leaking part most probably comes in our way through these very draining pipes and its better to see the surrounding of these pipes to better understand the nature of damages. Its hard to imagine that water being displaced from the very boundary of water pipes could leak and flow on other parts of the bathroom, either through concealing portions of the bathroom of visible, but the continuous leakage if happening is a sort of testimony to our claim that there is indeed a damages draining pipe that need either replacing, fixing or a complete makeover through the use of waterproofing products.

Water when keeps in an area for several days will eventually create seepage. After the seepage has been created, the next part of the water is to take its form to even a more troubling nature towards the concrete material, which is considered as creating a void. A void is far more disastrous than leakage and cracks because avoid is a space between walls. They are usually found in the bathroom and also around concrete-based water tanks. A stayed in water is the real culprit causing the voids to emerge. The solution is through the filling of cement and plaster then by further binding it with waterproofing based solution, to double ensure that voids are no more an issue.

Whenever we flush, we are exerting pressure into the pipes, which might be damaged from inside, cause they are concealed. If its that the cases, the leakage won’t come all of a sudden, but we’ll notice a gradual process of water signs in the form of seepage and then at the later stage leakage. These types of leakage usually come from the ceiling end of the bathroom leakage and seepage treatment. Mostly in residential apartments, where the bathroom is in line vertically, the flush creates force inside the pipes located at the ground and all of the leakages will surely add on the trouble of leakage for people living below.

Pipes are netted across the bathroom. These come in the form of supported pipes from the water tank, drain pipes, toilet tank pipes, sink pipes and pipes simply crosses down to other areas. These pipes carry with them water, a source which might exert pressured based on the force its being released initially. If the pipes are made from poor quality, the leakage will happen quicker, but with PVC pipes coming into the fold, the leakage emerging through concrete pipes could be fixed.

Fixing the problems of a bathroom leakage and seepage treatment through waterproofing is no big feat, but in fact, this method is considered the only solution there is that causes no breaking or other messy work. Simply through the use of waterproofing based chemicals, we can ensure a complete and prompt solution for our bathroom leakage and seepage treatment trouble in no time.

As the bathroom gets older, the complaints of leakage will increase, some can be said with improperly constructed bathroom. Keeping things simple for our readers, if there is a leakage bathroom that needs fixing, bathroom waterproofing solution has is second to none by a long shot.

How to stop moisture from walls